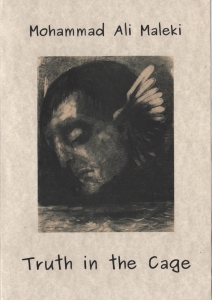 Rochdford Street Press and Verity La are proud to announce the publication of Mohammad Ali Maleki’s long awaited chapbook, Truth in the Cage. Written from within Manus Island detention centre, where Mohammad has been incarcerated for the last five years, Truth in the Cage is a powerful work of personal and political poetry.

Mohammad Ali Maleki is an Iranian poet and avid gardener who has been living in detention on Manus Island for five years. His poetry, written in Farsi, is translated into English by fellow detainee Mansour Shoushtari. Mohammad uses his mobile phone to send his poems to friends in Australia who help to edit, share and publish them. Mohammad’s poem ‘The Strong Sunflower’ was the impetus for, and first work published on, Verity La’s Discoursing Diaspora project. Since then, his writing has been published by online literary journal Bluepepper and by the Blue Mountains Refugee Support Group. He has been a featured poet on Rochford Street Review and his poems and letters have been included in the Dear Prime Minister Project and at the Denmark Festival of Voice. His poem ‘Tears of Stone’ was shortlisted for the Red Room Company’s 2016 New Shoots Poetry Prize and received Special Commendation for extraordinary work in extreme circumstances. His poem ‘Silence Land’ was performed at the 2017 Queensland Poetry Festival as part of the Writing Through Fences performance, Through the Moon. An essay about his writing is forthcoming in the Extreme Texts Issue of Jacket2 magazine. Despite living in extreme conditions, Mohammad continues to create poetry saying, ‘You can find my whole life in my poems, like a letter to God.’

“Mohammad Ali Maleki, along with translator Mansour Shoshtari, present an intimate and lyrical window into their world of exile as political prisoners of Australia. The work is woven with an embodied sense of their poetic and literary heritages, resulting in deeply engaging, contemplative and passionate poems.  Maleki’s direct use of language often opens out into a magical horror – no less real – implicating the reader as much as the poet in a deconstruction and reconstruction of identity. ‘What if the woollen jacket I am wearing unravels / and begins to fall apart?’. Truth in the Cage delivers truths, uncomfortable and often torturous, through a painterly language, providing much-needed clarity in these times of obfuscation and systematic silencing”

There will be a launch for Truth in the Cage on July 17 at The Sydney Poetry Lounge. The book will be available for purchase on the night. All profits go directly to Mohammad.

Outside Australia
$16 including postage